Hiroki Yuu is a member of class 1-4 of Minato Prefectural High School.

She's a childhood friend of Motoi and Midou and the reincarnation of a squire of Zerestria, Glen Schreiber. Her real identity is known to just a few as she feels safer borrowing Bart Belbania's identity.

Hiroki is voiced by Kawasumi Ayako in the drama CD.

Hiroki has long hair which looks orangish when seen in colour but dark when seen in the pages of the manga. Her eyes look like they are the same colour as her hair. The earlobe in her left ear is ripped and since it's a strong indication of her real identity, she hides it in her long loose hair.

She seems to be dissatisfied with her current female body as she sees it as less capable.

Hiroki has a very carefree attitude but occasionally acts similarly to her past self in certain instances. She is quick to judge things and quick to act.

Despite her inability to use magic, she is always ready to fight on the front lines. She is clearly loyal to Veronica/Minami and reacted strongly when Minami and Takao pretended to be enemies of Veronica. She was born a girl but some of her past life's feelings as a man influence her as seen in one of the omakes.

Hiroki has been able to remember her past life since late in middle school, but she didn't reveal that until later. After magical events started to took place in high school, she at first claimed to be Princess Veronica, but her bluff was quickly exposed by Minami Harusumi. Hiroki stated she wanted to become Veronica's body double and corrected herself, saying she was the reincarnation of "the fang of the house Belbania" - Bart Belbania.

It is later revealed, after the confrontation with Midou and Momoka, that Hiroki is actually Glen Schreiber - adopted brother of Bart Belbania. As Glen Schreiber had many enemies and Hiroki remembers vaguely that they wanted him dead, she decided that not revealing her true identity is a lot safer, so her true identity is known only to Midou and Momoka. Since she was close to Bart, she can act like him without arousing any suspicions, but it also puts her at a disadvantage because she can't let slip information known only to Glen while talking with others, especially Minami.

Motoi has known Hiroki since they were in middle school. Motoi likes Hiroki and confessed to her in the spur of the moment. He was later rejected by Hiroki.

Like Motoi, Midou has known Hiroki since they were in middle school.

At first, Hiroki and Minami had an awkward relationship when she claims to be Veronica. But she gradually becomes very loyal to Minami and tries to serve his wishes as a close friend. 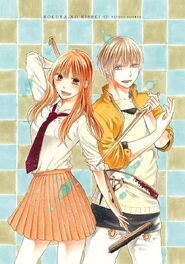 Hiroki Yuu (on left) and Glen Schreiber (on right)
Community content is available under CC-BY-SA unless otherwise noted.