Minami Harusumi is the main protagonist of the story. Since early childhood, he was gradually recovering his memories from the past life as Princess Veronica of Zerestria.

Minami is voiced by Fukuyama Jun in the drama CD.

The girls in his class at high school sees Minami as innocent looking; whereas in middle school, after driving off the bullies, there were girls thought that he looked cool.

As atonement for not being able to protect the castle as Veronica in his past life, Minami has made it his mission to protect the school in present life. He is tend to be shown as a bit of a pushover and having no backbone; however in the times of need he can be cunning and assertive. He is also shown to be able to read into other people's intentions before said intentions are revealed.

In a short story, it is revealed that due to the influence of his memories as Veronica, he was socially inept; especially at making friends. Thus, at the advice of Kamioka, he developed his blunt nature of outrightly saying and requesting for friendship.

Minami was born into present day Japan with memories of his past life. When he was in elementary school, he let the class know of his memories without thinking of the consequences. It appeared like he was cast into the role of the knight for the class play as seen from his words.  "Teacher, I do not know what is a Knight's way of doing things...... I don't know if I can act the role of a knight well or not. "  - Minami Harusumi, Chapter 00, Volume 1

Because of these lines, all his classmates would jeer at him and humiliate him.

The Discovery of Magic[]

When Minami was in middle school, he was still being made fun of - even if it was not openly done. It was during this time that he met Kamioka Saya. Kamioka was from a different elementary school and hence, did not know much about Minami. It was Kamioka who did not laugh at Minami's faith in his past life. She also gave him the idea of using magic to discover whether his previous birth was real or not.

One evening, Minami saw Kamioka with a swollen face. On being questioned, she told him that she had gotten into a fight with the third years in her basketball club. She explained how she felt extremely mad at first but then she realised that she was not a kid and had to learn how to handle such situations.

"If there is a proper way for middle schoolers to behave, I have to learn it."" - Kamioka Saya, Chapter 00 , Volume 1

The next day, Minami ended up in a situation that was similar to Kamioka's. The third year students cornered him in the toilet and began to bully him. In his rage, he plucked fresh hair and was prepared to use magic. Suddenly, he remembered Kamioka's words from earlier and stopped himself. He quickly locked himself behind a closet door and decided to improvise. He fought off the third years with a hose pipe and a mop.

When the lookout, who heard the yells from inside the toilet, came in, he faced Minami with a knife. It was at that moment when Minami found out that one strand of Kamioka's hair had gotten stuck on the button of his coat the previous day and was still stuck on it. He used magic with that hair and created a flash of blinding light to escape.

It was this incident that told him that his past life was not just a fantasy and he began to focus on getting his lost memories back.

Takao is Minami's girlfriend. He confessed to her in front of the rest of the class before anyone regained the memories of their past lives. She replied with mutual feelings and they started going out. After Takao regained her past memories as Rida, she took on the role as Minami/Veronica's guard, despite the latter preferring a normal relationship between the them. Both of them seems to be seeing each other as the current selves more than their past selves.

Kamioka is Minami's friend from middle school. She was the first classmate to befriend Minami, and they have continued being friends since then. To Minami, Kamioka is the symbol of what is "normal".

Minami is also known to have a father, mother and younger sister Mito. 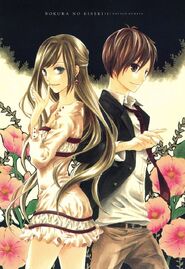 Minami Harusumi with his past self, princess Veronica
Community content is available under CC-BY-SA unless otherwise noted.